I went walking and what did I see? 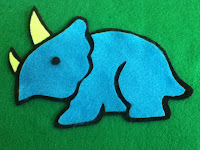 And we all know this dinosaur...many thanks to Melissa for placing dinosaurs on FF
so that one day I could make my own flannel dinos!
(http://melissa.depperfamily.net/docs/Dinos003.jpg)

Prompted by a friend and librarian who called to borrow my dinosaur bucket and my favorite Dinosaur book...I finally sat down to make my flannel dinosaurs. While taping, cutting and pasting - I thought maybe my book and bucket would make a nice post.

Are you ready for dinosaurs?

Sammy and the Dinosaurs
by Ian Whybrow 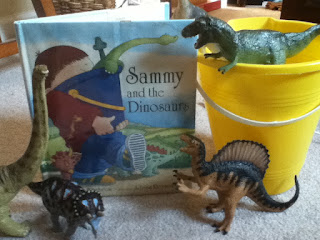 I adore that Sammy keeps his dinosaurs in a bucket.  It makes me think of beaches, and collecting ancient rocks, sea glass and even a bucket of crabs.  My dinosaurs like to play in the sand!

When Sammy first discovers his dinosaurs, in the attic with gran, (so perfect for the character to be the grandmother!), he takes them to the library to learn their names!  (isn't this the best?!) 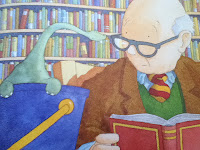 He reads a book to discover the name of each dinosaur! 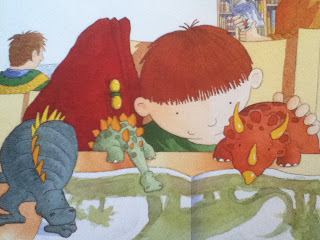 Inspired by this beautiful book I found myself a yellow beach bucket and collected some old dinosaurs, just like Sammy.  After we read the book in story time we do a story with all the old dinosaurs.
Here's my bucket: 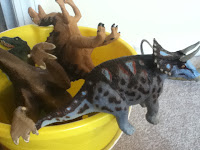 I went walking, in West Hartford, and what did I see?
I saw a ...... (pick one out of the bucket and let kids guess), brontosaurus following me! 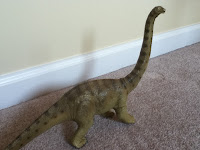 (The book is magical...doing this is almost as good!)

I went walking, right here in West Hartford, and what did I see?
I saw a triceratops following me! 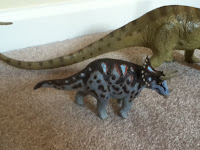 I went walking, right here in West Hartford, and what did I see?
I saw a spinosaurus following me! 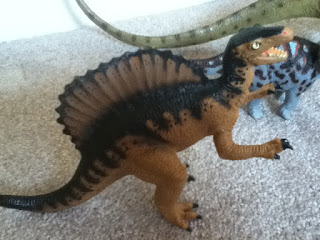 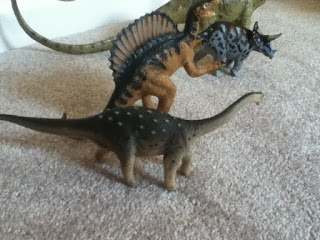 and the baby T-rex 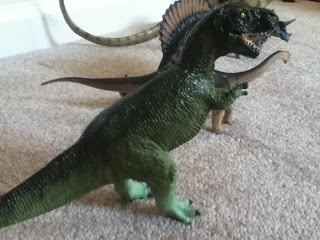 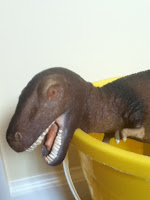 who wants to come out of the bucket? 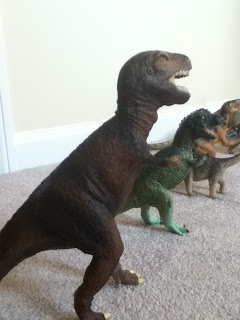 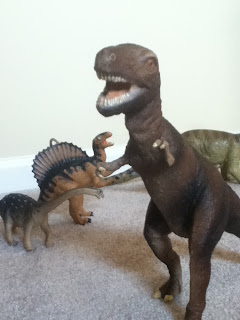 RUN!  Dinosaurs!  RUN!
Back to the bucket! 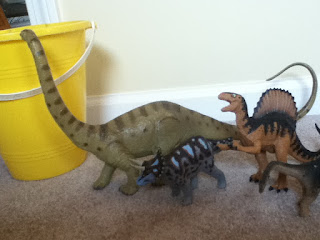 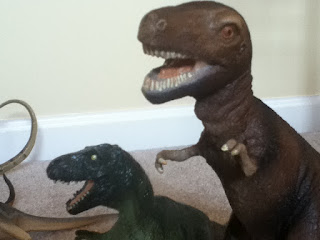 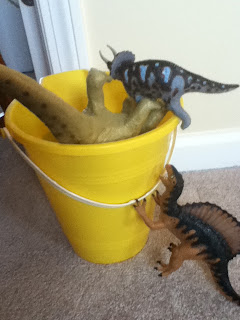 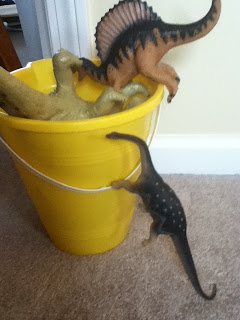 Hmmm, still hungry?  Maybe we could go out for a burger?  Good idea! 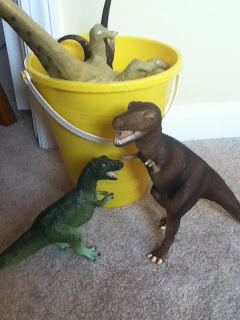 Time for me to get back to my felt and make more dinosaurs for the flannel board.

p.s.  (Piper Script)  I like the felt dinosaurs best!  They are soft and I can sleep with them.

Thanks for commenting. All comments await moderation before showing in the post. 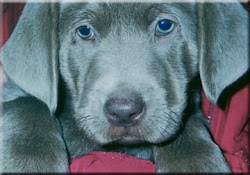 Please visit my fish at the end of the page!

The opinions here are mine and do not reflect my employer's. Successful librarianship requires collaboration. Amen

This is the place to play!

Welcome to our blog!
If you love to read & sing & dance with your children ~ please visit Piper and Jane every week! We will post stories and smiles, flannels and fingerplays, crafts and craziness and the very best Children's Books we know.
Oh...and P.S. (Piper Scripts) Please feed the fish. They're fascinating and hungry! Thanks xo

Flannel Friday - check this out!

Jane
I am the fortunate person who accompanies Piper to the Library where we work! Story Time - that's what we're about! Eight years ago I decided that my love of dogs needed to be a part of my love of all things children and literacy. Inspired by librarian/puppeteer, Peg Donovan, I went in search of the perfect pet. On the very first day..I spied with my very own eye... pink stripes...on Piper's tag! She is an absolutely lovely lab who came home and immediately chewed my daughter's French/English dictionary. Mind you it was a petite paperback copy...but it had traveled to Paris and back. Sibling rivalry from the start! Piper was not willing to take a back seat in this family. And Oh My Goodness...a chewed-up book...what is a children's librarian to do? That's how our story began <3 Piper is my very real puppet and we love libraries, children, books, flannels, music and being silly.